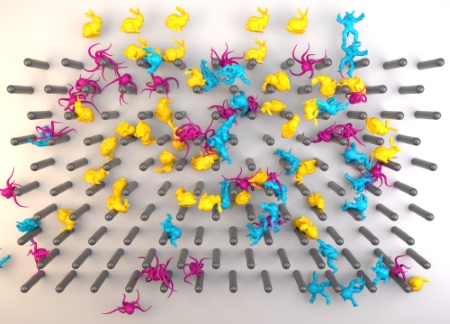 In this paper we present a novel operator splitting approach for corotated FEM simulations. The deformation energy of the corotated linear material model consists of two additive terms. The first term models stretching in the individual spatial directions and the second term describes resistance to volume changes. By formulating the backward Euler time integration scheme as an optimization problem, we show that the first term is invariant to rotations. This allows us to use an operator splitting approach and to solve both terms individually with different numerical methods. The stretching part is solved accurately with an optimization integrator, which can be done very efficiently because the system matrix is constant over time such that its Cholesky factorization can be precomputed. The volume term is solved approximately by using the compliant constraints method and Gauss-Seidel iterations. Further, we introduce the analytic polar decomposition which allows us to speed up the extraction of the rotational part of the deformation gradient and to recover inverted elements. Finally, this results in an extremely fast and robust simulation method with high visual quality that outperforms standard corotated FEMs by more than two orders of magnitude and even the fast but inaccurate PBD and shape matching methods by more than one order of magnitude without having their typical drawbacks. This enables a very efficient simulation of complex scenes containing more than a million elements. 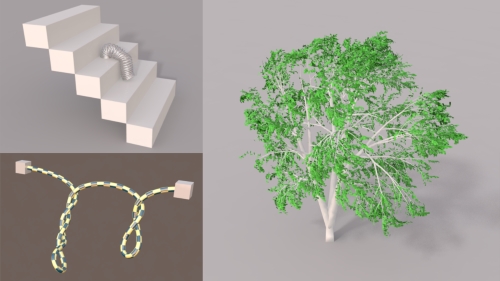 In this paper, we present a novel direct solver for the efficient simulation of stiff, inextensible elastic rods within the Position-Based Dynamics (PBD) framework. It is based on the XPBD algorithm, which extends PBD to simulate elastic objects with physically meaningful material parameters. XPBD approximates an implicit Euler integration and solves the system of non-linear equations using a non-linear Gauss-Seidel solver. However, this solver requires many iterations to converge for complex models and if convergence is not reached, the material becomes too soft. In contrast we use Newton iterations in combination with our direct solver to solve the non-linear equations which significantly improves convergence by solving all constraints of an acyclic structure (tree), simultaneously. Our solver only requires a few Newton iterations to achieve high stiffness and inextensibility. We model inextensible rods and trees using rigid segments connected by constraints. Bending and twisting constraints are derived from the well-established Cosserat model. The high performance of our solver is demonstrated in highly realistic simulations of rods consisting of multiple ten-thousand segments. In summary, our method allows the efficient simulation of stiff rods in the Position-Based Dynamics framework with a speedup of two orders of magnitude compared to the original XPBD approach.


A Robust Method to Extract the Rotational Part of Deformations

We present a novel algorithm to extract the rotational part of an arbitrary 3x3 matrix. This problem lies at the core of two popular simulation methods in computer graphics, the co-rotational Finite Element Method and Shape Matching techniques. In contrast to the traditional method based on polar decomposition, degenerate configurations and inversions are handled robustly and do not have to be treated in a special way. In addition, our method can be implemented with only a few lines of code without branches which makes it particularly well suited for GPU-based applications. We demonstrate the robustness, coherence and efficiency of our method by comparing it to stabilized polar decomposition in several simulation scenarios.